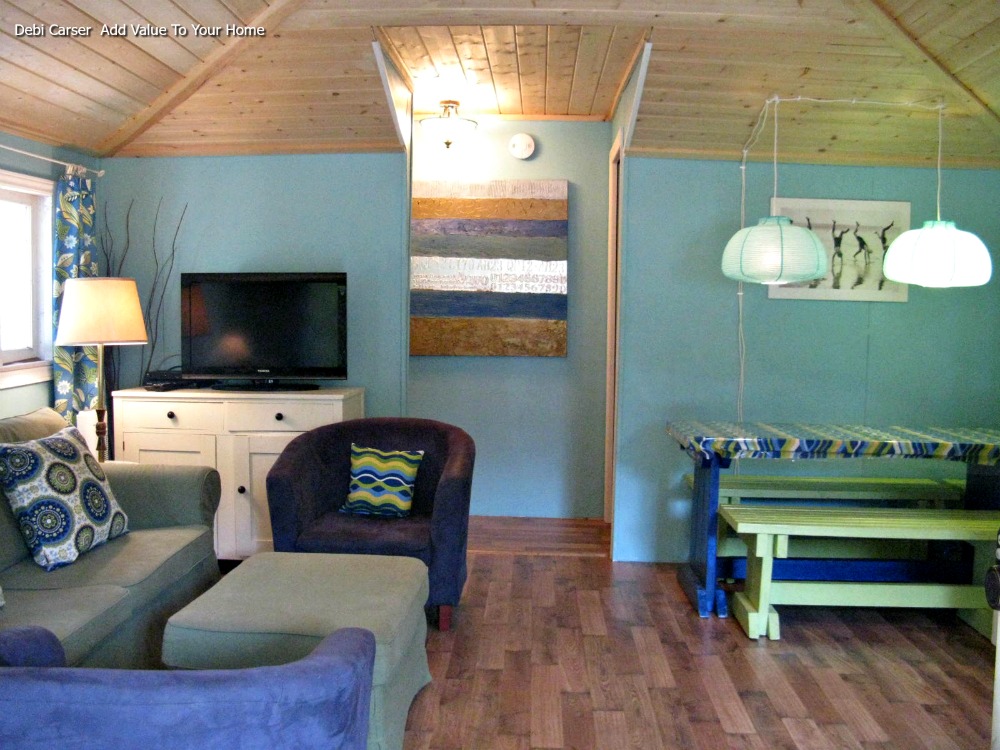 I buy fixers uppers in sought after neighborhoods.  I look for the worst in this case cottage on a good street and overtime renovate to either flip it or to rent it out.

This 1930’s cottage is a minute walk to one of Canada’s top beaches, Sauble Beach. Yet over 50 real estate agents and their clients went through the cottage and did not put in an offer of purchase.  What others saw as alot of work, I saw as an opportunity.

When buying a fixer upper, there are a few key factors to take into consideration.  First factor of course, is location, location, AND did I mention location? Only a short walk to one of the most sought after beaches, it should have been rented out all summer. But its poor design, neglect and poor workmanship stopped it from being the hot spot it was meant to be. 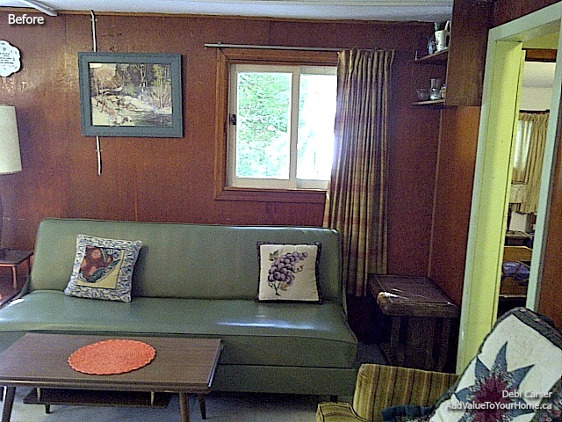 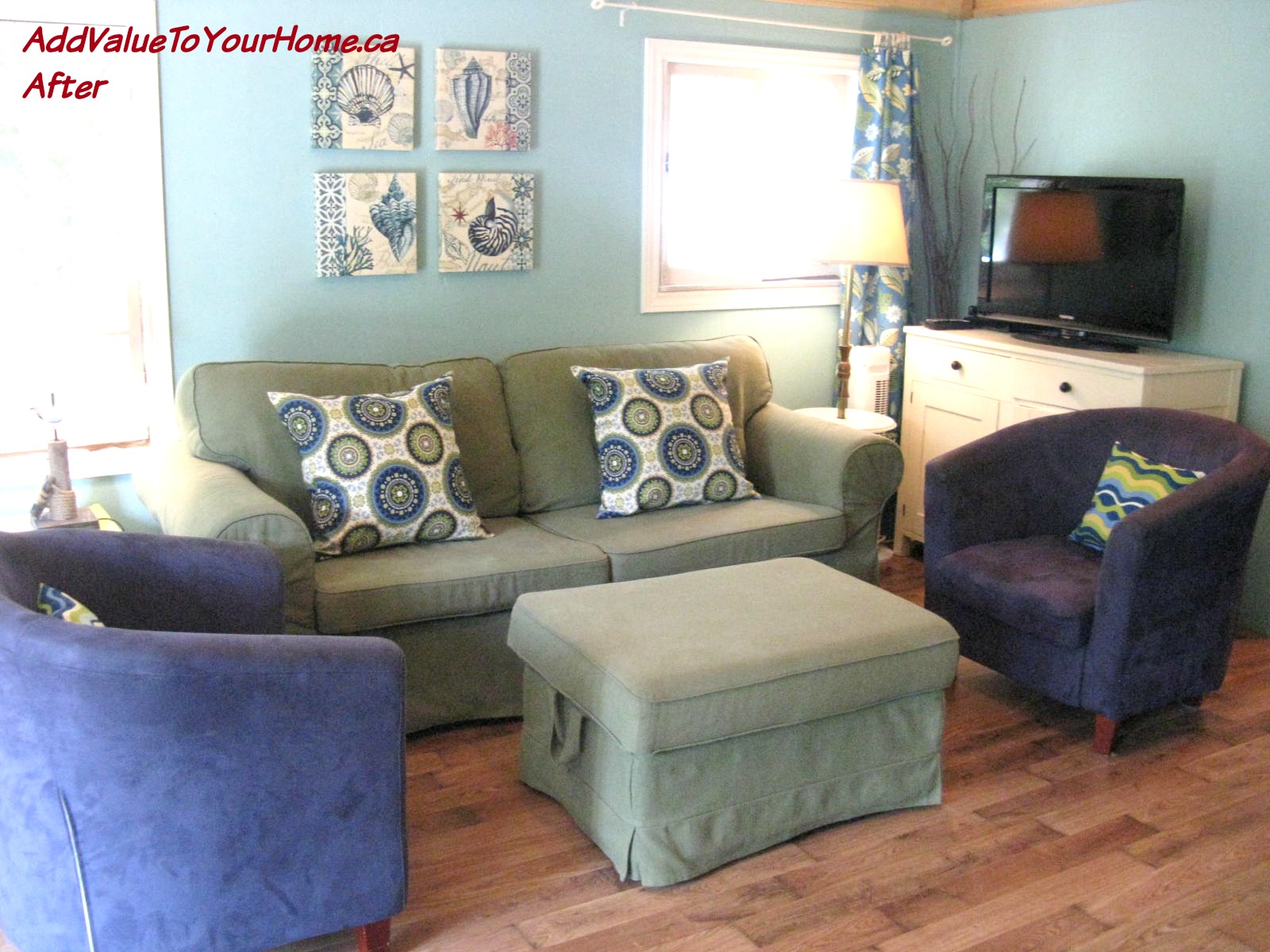 Painting the walls a soft warm beachy blue, transformed this dated ’30s cottage. The green couch also got an update with this pull-out couch to accommodate more guests. The analogous color scheme of blue, blue|green and green gives the space a fresh vibe that creates a relaxing and inviting enviornment the minute you walk in the door. 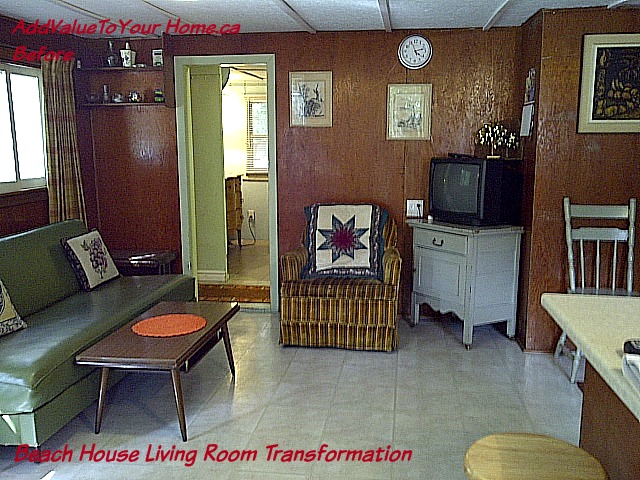 There were alot of issues with this cottage.  The entrance to the back hallway to the bedrooms and washroom was right in the middle of the living area. This made it difficult to have an inviting and comfortable sitting space to hang out at the end of an amazing day at the beach! Every time someone wanted to use the washroom or go to the bedroom, they would be disturbing the family and friends when walking through. 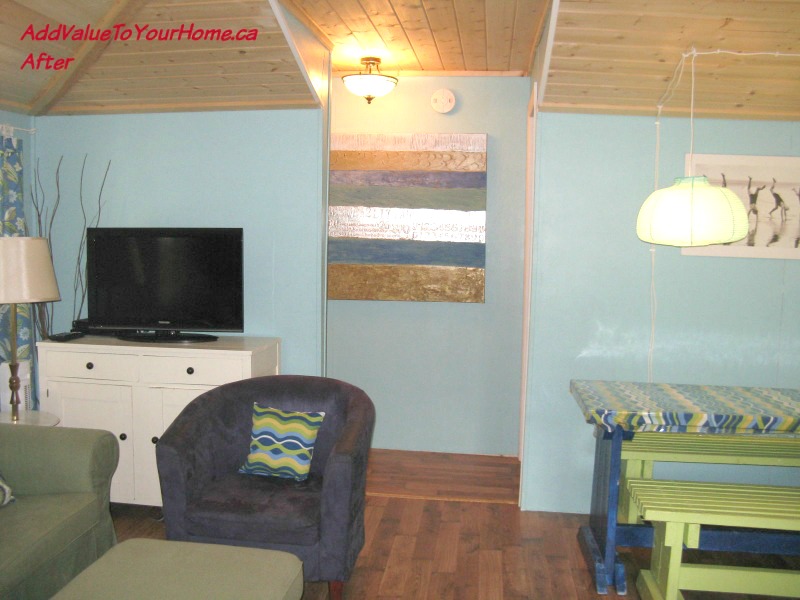 Moving the opening to the middle made it easier for people to pass through to bedrooms and washroom without interrupting the conversation or the movie on the TV. 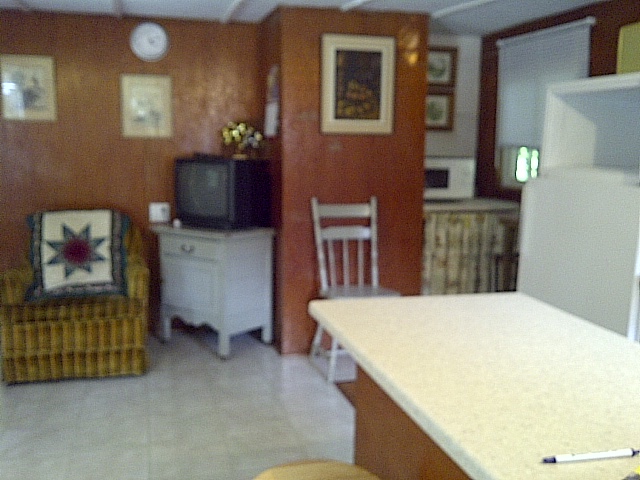 Please excuse the quality of the above picture.  Unforunately its the only one that shows the former shower.  YES!  You read that correctly.  Behind the green chair is the shower protruding into the living room.  The shower was backing into the kitchen area – YIKES! 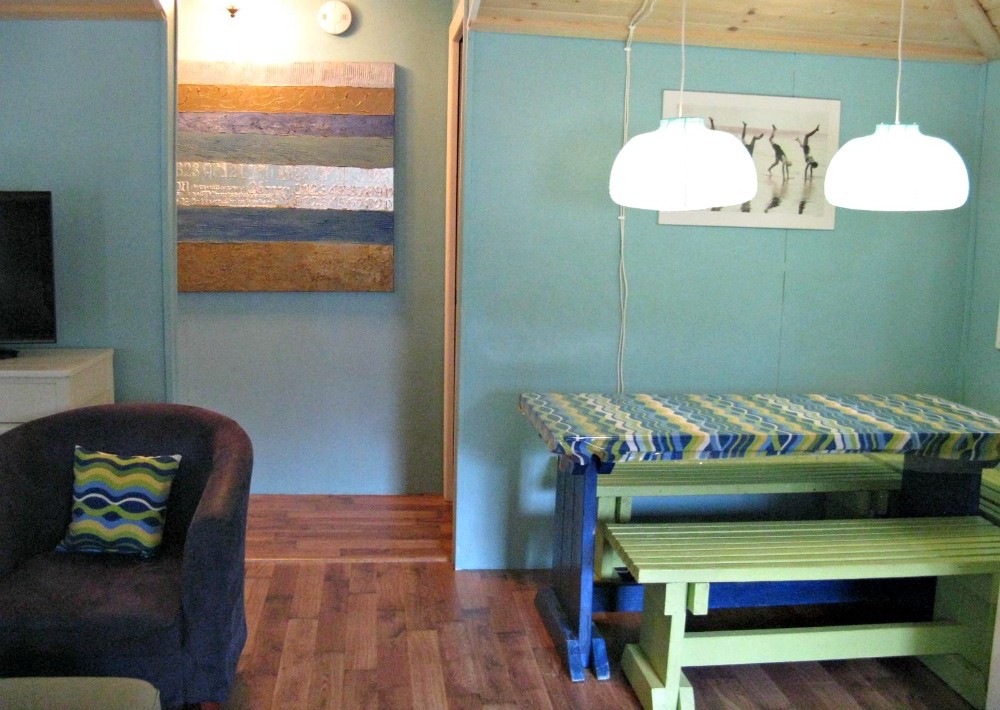 The entrance to the back hallway was centred creating a better flow for the living area.  The shower was relocated using some space from the master bedroom.  The cute beach themed dining area replaced the shower.  A much more efficient use of the small space. 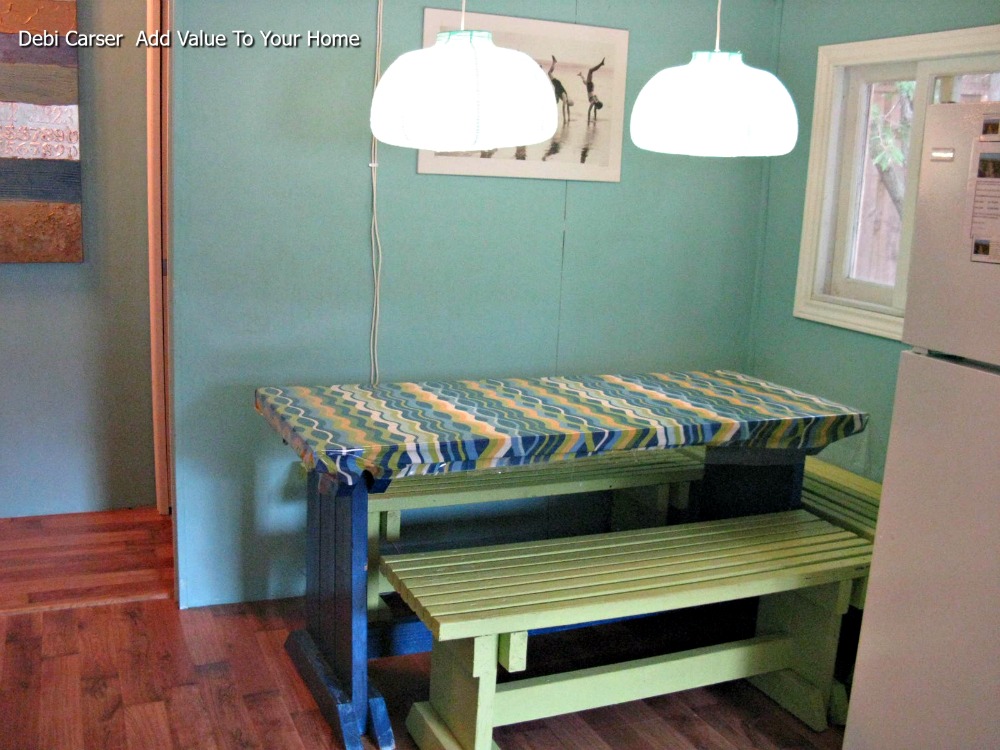 The new trendy dining area replaces the shower & microwave stand. A fun table and benches were added to create a casual and fun area where it could accommodate alot of children that stay in the bunk bed room!!!  Two trendy hanging lamp shades adds light to the subject and the retro 60’s bathing beauties artwork completes this trendy beachy eating space. 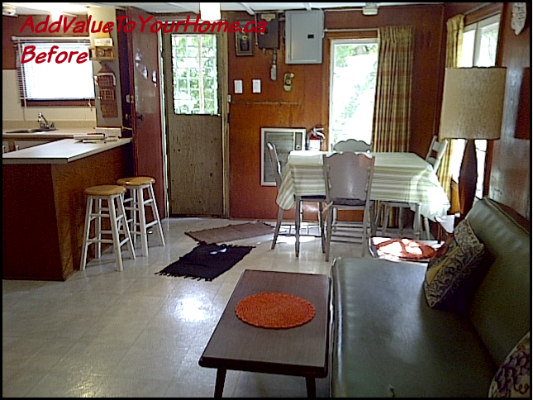 Dated! Dated! Dated! Is the ONLY word to describe this former dining room area. Would YOU want to rent this cottage out? Yeah – no body else did either! 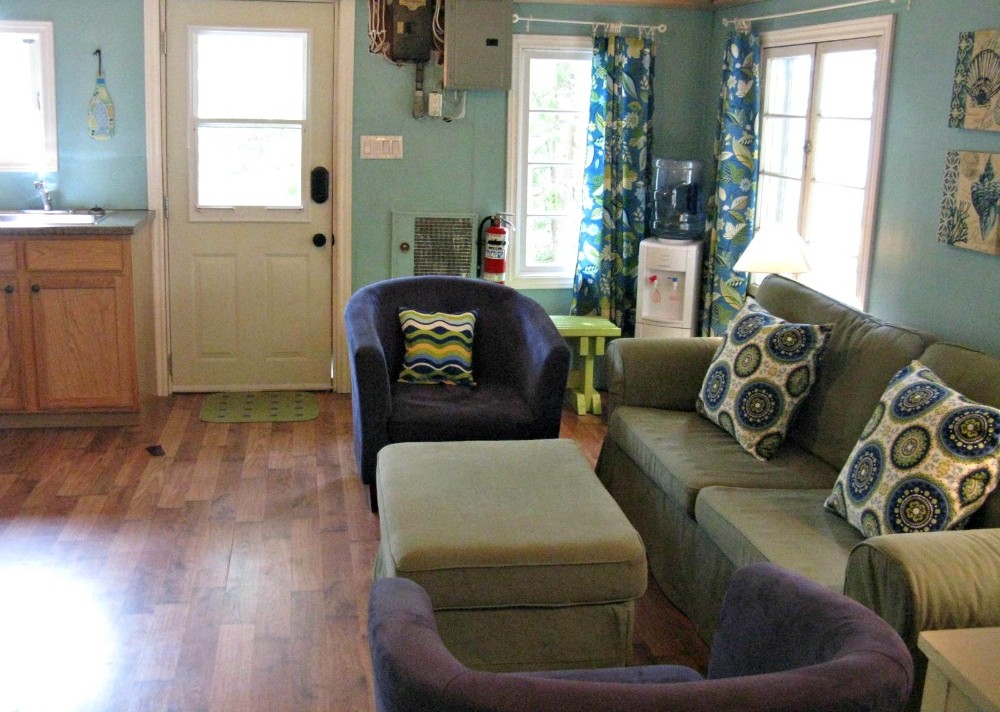 The walls were painted a beachy blue.  The color was pulled out the from the new trendy curtains.  A pull out double bed Ikea sofa replaced the old green leather couch & table.  Pillows in a co-ordinating fabric to the curtains and trendy coastal artwork complete the look.  Wide plank de-stressed oak flooring replaced the tacky dated vinyl floor. The dining room table was moved to the far corner for convenience.  And a bench was placed at the front entrance to catch all those items that you have in your hands when you walk into the cottage. 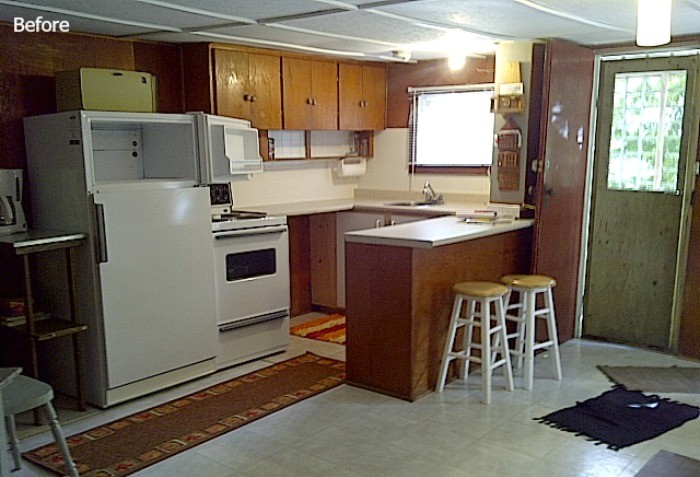 What a mess! The kitchen was a mixture of old cabinets, and a make shift dresser for the breakfast bar. The breakfast bar and stools were in direct line of the opening door – not a functional design.  The kitchen needed a total redo. 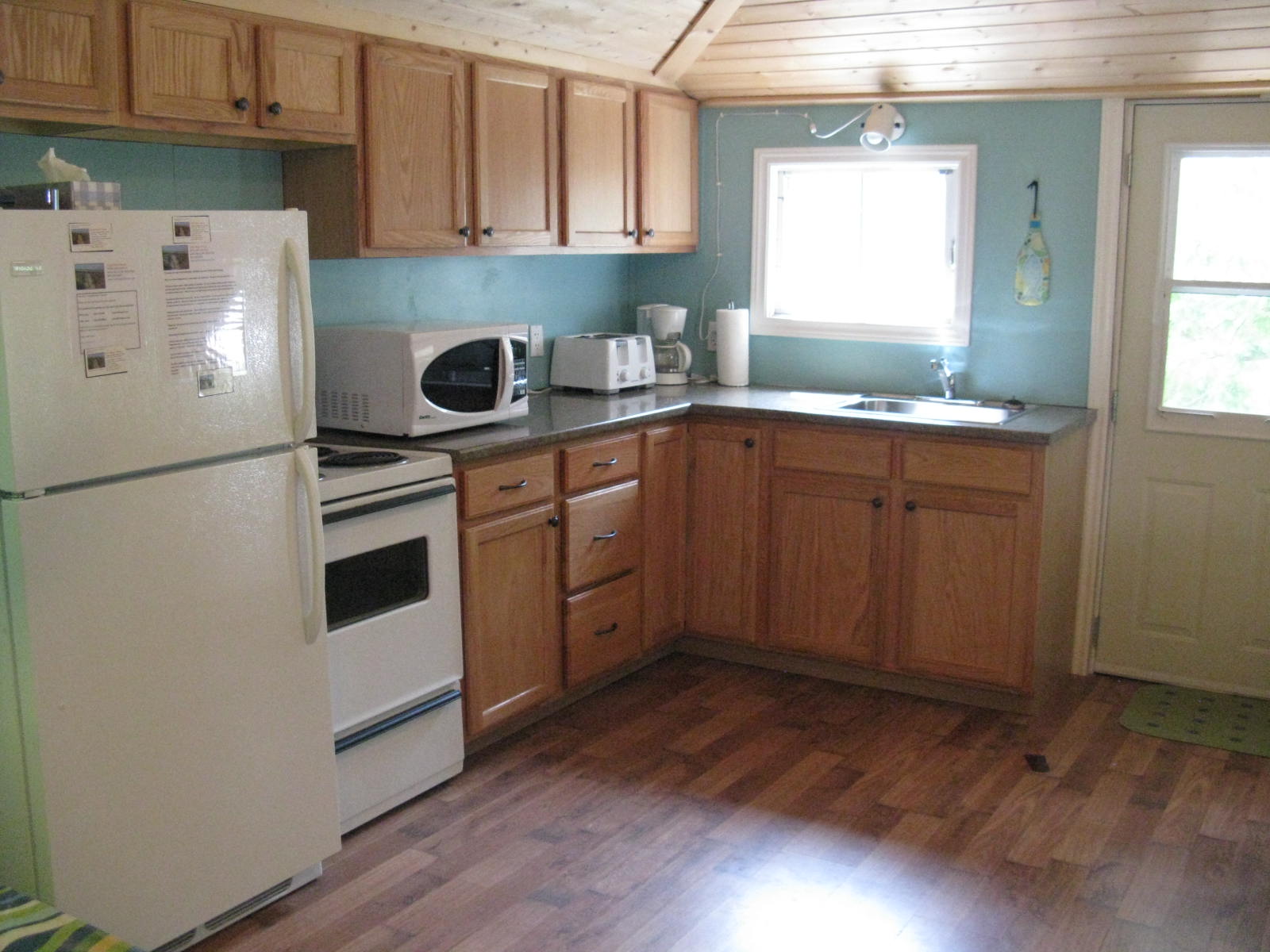 All the kitchen cabinets and dresser were ripped out and replaced with this smaller but functional L-shaped kitchen.  Unfortunately, no matter how hard I tried to make it work, because of the size of the kitchen, an island was not feasible.  This cottage is 400 sq ft, and due to the layout, door openings, and the number of guests allowed, sleeps 8 in total, an island did not make sense.  However, the funky table & benches were added and no one misses an island. 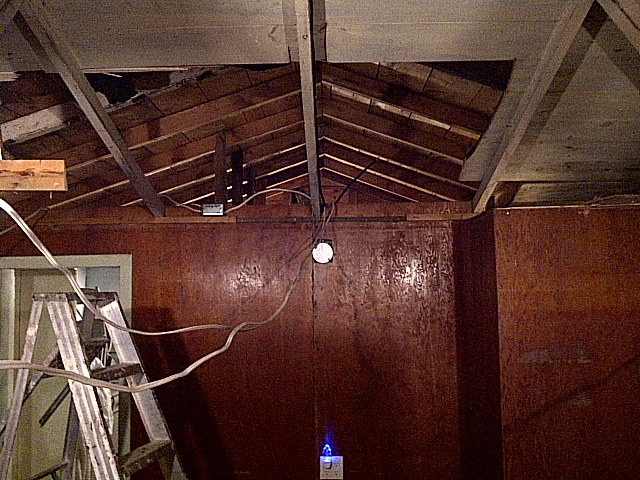 The ceiling was a flat drop ceiling with ceiling tiles.  More like what you find in commercial spaces as opposed to a trendy beach cottage. After opening up the ceiling to update electrical, we discovered this amazing space that had been covered up for years. 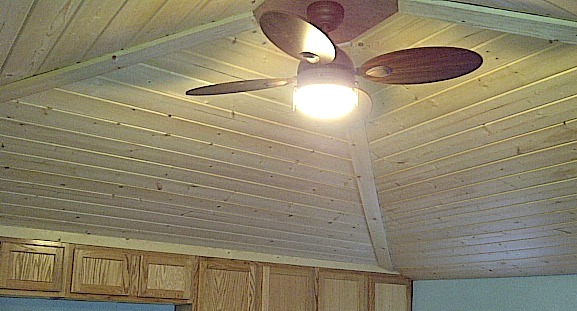 After finding out about this amazing high vaulted ceiling, I decided to close it up with pine planking for a beachy look.  It turned out amazing if I don’t say so myself/ 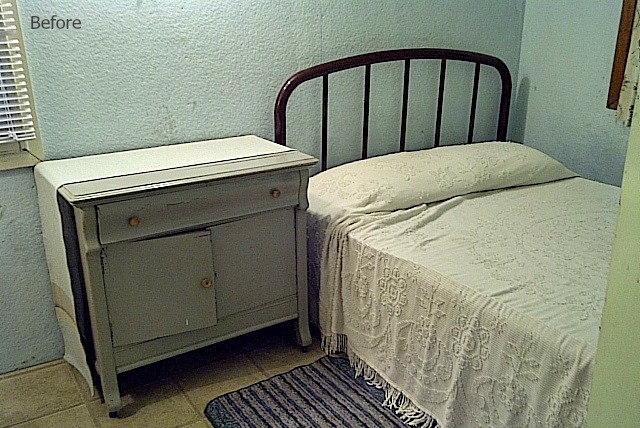 The master bedroom was in dire need of a makeover from the walls, flooring and an update for the furniture. 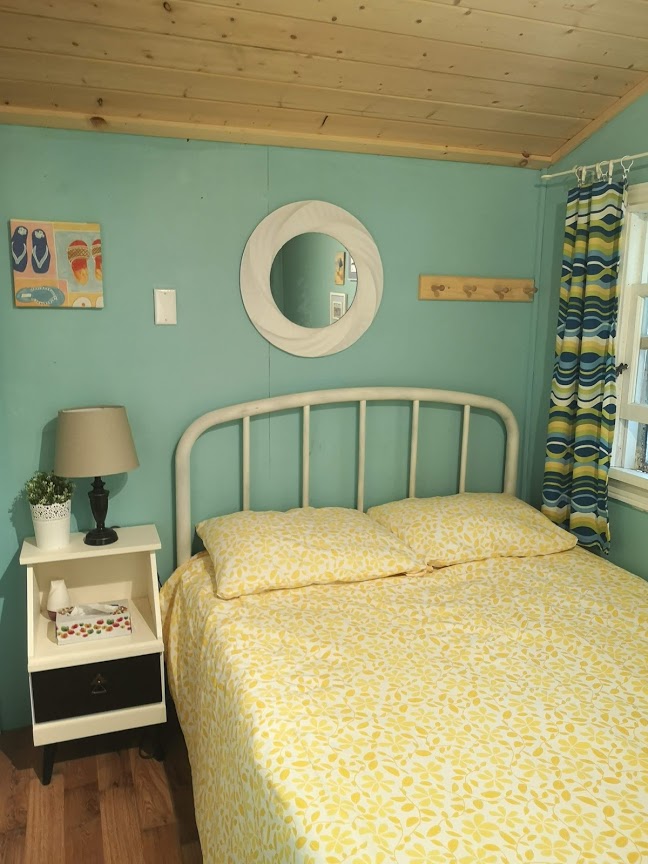 The ceiling received the same pine planking as the open concept living room.  Part of the room was taken over to put in the shower. The walls received the same beach blue as the living room area.  The laminate flooring replaced the worn out vinyl flooring, and upcycled furniture gave the master bedroom that 60’s beach vibe. 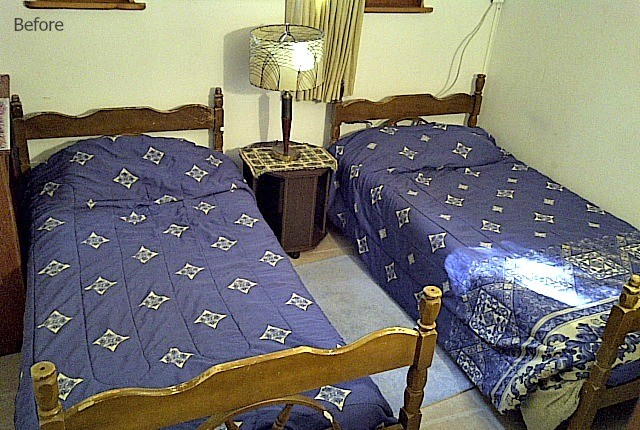 Linoleum floors, dated furniture, boring walls.  How many times can I say dated? 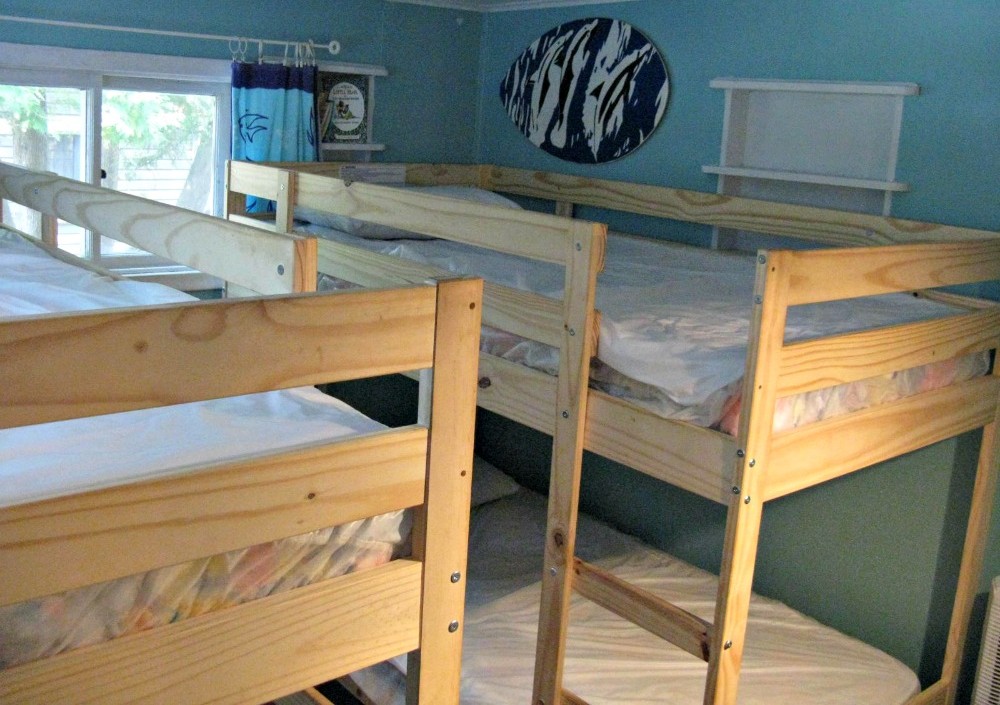 Switching the furniture out to hold TWO bunk beds which sleeps 4 KIDS!!  Crazy right? Families come back year after year because their kids LOVE the bunk bed room.  It has become a little famous in the area. 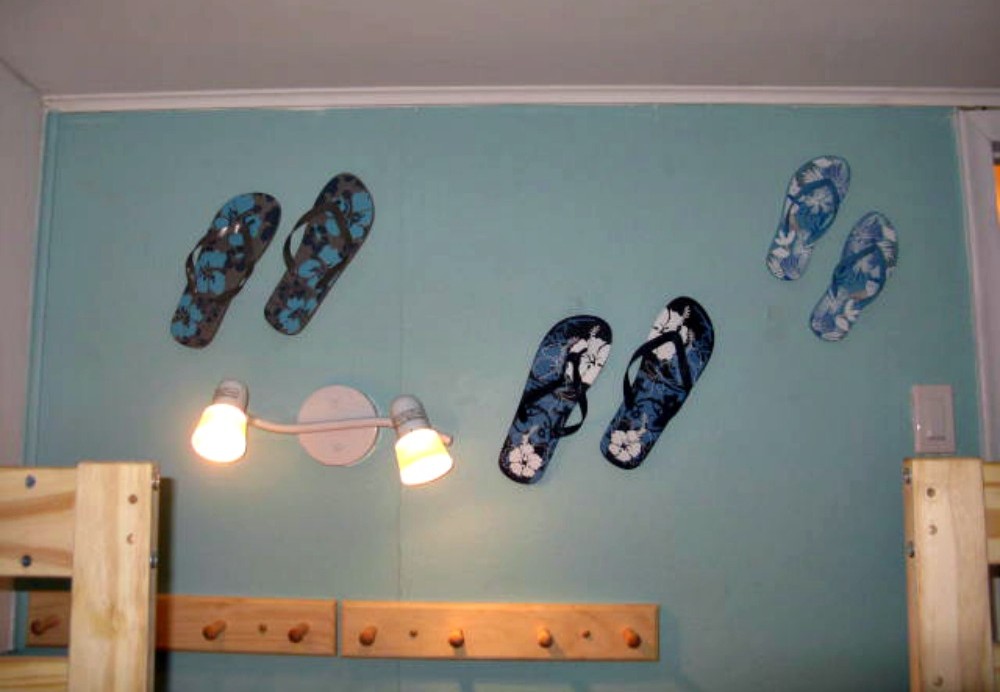 The blue walls and cool art deco like flip flops and skimming boards have kids LOVING this room.  They come back year after year for the cool beach vibe cottage and of course the beach!! 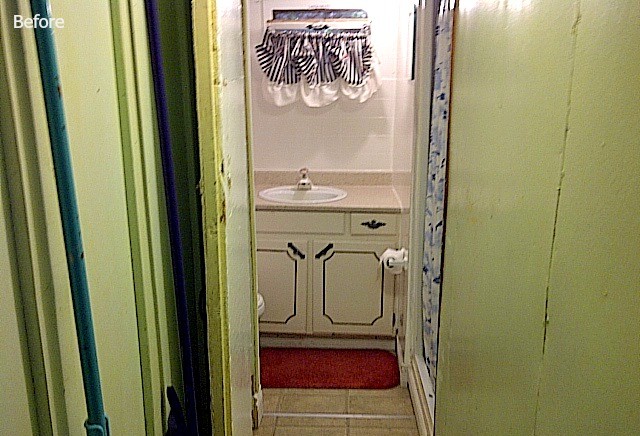 YES!  This was the bathroom before with its green hallway.  The shower on the right actually jutes out into the living room. It needed a total makeover. 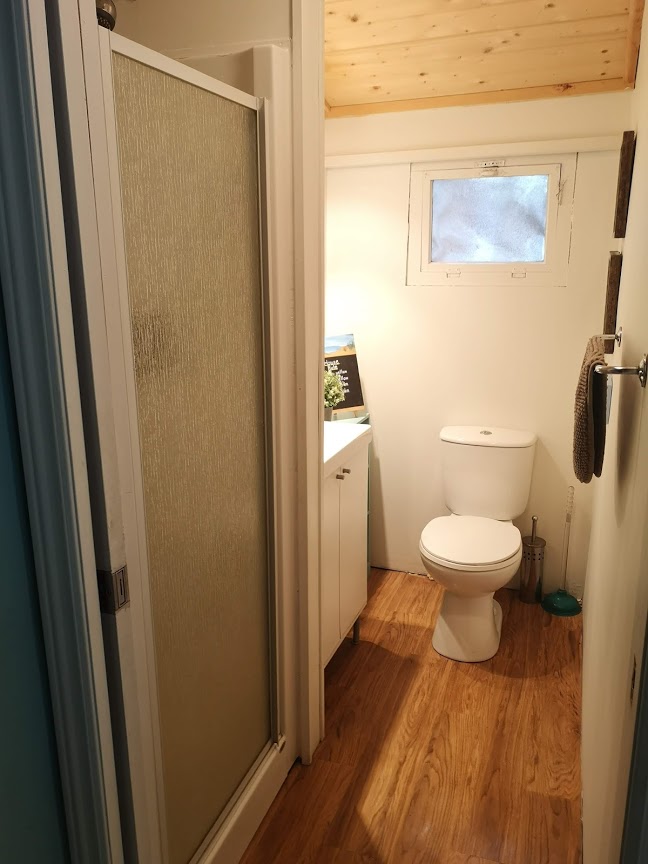 The shower was moved to the left hand side to take the space back that belonged to the living room.  Some space was removed from the master bedroom but was not noticeable.  All the fixtures were updated including a stream lined bathroom vanity which made more space for the shower.  A modern shower stall was installed, vinyl flooring and of course, the signature pine plank ceiling.

The 60’s beach vibe makes this cottage sought after by guests wanting to relax at Ontario’s No. 1 beach!  It’s no wonder 50+ agents and their clients walked away from from this beach house rental only steps away from one of the most sought after beaches.  Every each inch of the cottage needed to be transformed from the structure, layout and of course, the design.  But with lots of imagination, a lot of hard work and several dollars later, the cottage is now a sought after rental property paying for itself. 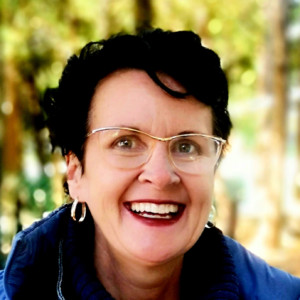 I’m Debi Collinson. Designer. Stager. Real Estate Investor. In 2006, at the request of a realtor, I staged my very first home. Staging houses was just starting to become popular. I was very nervous staging my first house, but the sellers liked their newly redesigned home so much that they turned down an offer for full asking price. I went back to design school and have never looked back. Since 2006, I have been staging & styling spaces to make them look like they belong in a magazine page, and buying “fixer uppers” to fix up & either sell for a healthy profit or to rent them out. I’m currently living in my 8th “fixer upper.” Sign up to receive my e-mails of how to make your home stunning, how to sell your house for top dollar AND how to become financially independent one fixer upper at a time! 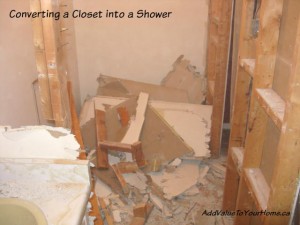 Converting a Closet into a Shower! – ORC Week 3 In the fall of 2015, I joined almost 200 Designers/Bloggers in the One Room Challenge hosted by Linda of Calling It Home where we have 6 weeks to transform a room of our choice from boring to stunning! I picked our Master Bedroom & En-suite… 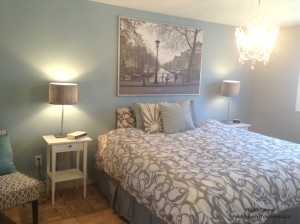 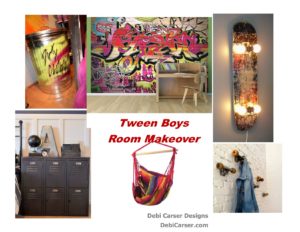 Tween Bedroom Makeover – ORC | Week 1 I’m so excited to be part of the One Room Challenge. The One Room Challenge was created by Linda of Calling It Home who organized this bi-yearly friendly design competition where designers|bloggers around the world transform one room in their home in just 6 weeks. 6 weeks… 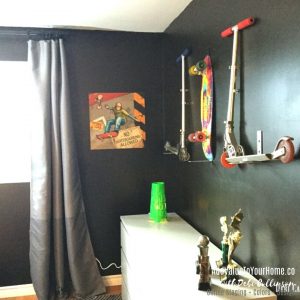 Painting my Son’s Bedroom BLACK I’m SO excited to be part of the One Room Challenge again.  A huge thanks to Linda of Calling It Home for organizing this bi-annual design challenge where hundreds of design|bloggers around the world transform one space in their homes over 6 weeks. This time around I decided to makeover my tween… 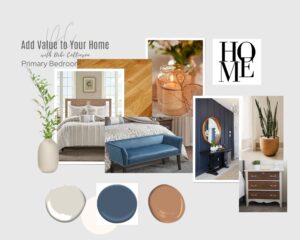 It’s back!  The One Room Challenge where 20 Featured Designer and 400+ Designers/Bloggers (that’s me!) take ONE room in their home and transform that space over  8 weeks. I have a BIG to do list as I’m giving this 70’s something townhouse a total refresh one room at a time. I bought another fixer…